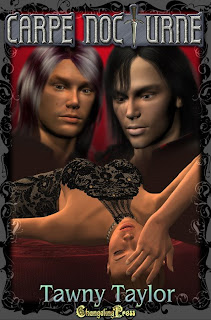 New Collection:
Carpe Nocturne by Tawny Taylor $8.99(vampire menage-a-trois)
Now Available from www.ChangelingPress.com
One determined entrepreneurTwo seductive vampiresA brutal murderer……and a bar where every vampire knows your name.Gives new meaning to the expression “Thrilling Nightlife.”
Burke Langton is on the run. Wrongfully accused of murder, he’s just one step ahead of the Excoluni -- the law enforcement arm of the United Magical Nations -- trying to track down the real killer. When the murderer strikes again, this time at Club Carpe Nocturne, Burke learns the owner, Sylvie Durand, is not only his Origo -- his mate -- and she may be the murderer’s next victim.
Miko Dvorak, a high-ranking officer of the Excoluni, is assigned to bring Burke to justice. But that’s no easy task, for the two share an Origo. Should he be caught protecting Burke from the Excoluni, his career will be over. Sylvie’s determined to convince him to take that risk.
Together the three must conquer a madman who will stop at nothing to get what he wants, clear Burke’s name, and shatter the chains that bind them to their own private demons before they can achieve the blood-bond they must have to survive.
http://www.changelingpress.com/product.php?&upt=book&ubid=848
Purchase Carpe Nocturne before this week's new books release and use the discount code"Carpe Nocturne" to receive 5% off your entire order.This collection contains the previously released novellas:Carpe Nocturne 1: Dressed To Kill,Carpe Nocturne 2: Kiss Me; Kill Me,Carpe Nocturne 3: If Looks Could Kill. "Tawny Taylor blew me away with this series... I love anything Tawny writes because she has a gift and is able to draw you in to her stories from beginning to the end."-- Nicole Harvey, ParaNormalRomance (PNR)"If you haven’t yet read the Carpe Nocturne series, I urge you to do so immediately!"-- Tara Renee, TwoLips Reviews