Kelly Jamieson's "Love Me" Is OUT! 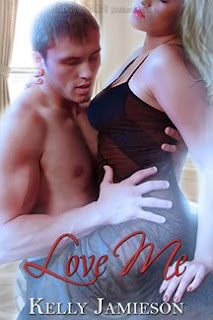 Congratulations to Kelly Jamieson on her release this month.

“Love Me” by Kelly Jamieson
Read An Excerpt OnlineGenre: Contemporary Romance, Red Hots!
ISBN: 978-1-60504-194-0Length: Short StoryPrice: 2.50Publication Date: September 16, 2008Cover art by Scott Carpenter
How far does she have to go to get his attention?
Melina Wenham is worried and frustrated. Lately, her boyfriend of six months seems to have lost interest in her. Yes, she knows he’s stressed about his big project at work, but jeez, it seems like he’d rather go solo than have sex with her. Sexy lingerie, a Brazilian…nothing seems to get his attention.
Gavin’s frustrated too. He’s under enough pressure at work, without feeling more from Melina every time he gets home.
Another night, another party, and Gavin is off talking to the boys. Feeling ignored yet again, Melina confides her troubles to an acquaintance, Abby, who suggests shaking him up by flirting with another guy. Hmm. Not a bad idea, except there are no flirt-worthy guys at this party.
Then Abby suggests a different tack—flirt with her.
Could a little girl-on-girl tango be the match that reignites romance with Gavin? There’s only one way to find out…

I read the excerpt and have to say - this is well worth the time to check it out! Congrat's Kelly.

Kelly will also be appearing during this week to talk about her writing.