And the Aussie's have it...welcome our latest Aussie Babe!


First I’d like to say a huge thank you to my lovely host for having me!


This week marks an extremely important date for Australians, and I am very excited to share it with you and my memories of this day growing up.


Australia Day has many great memories for me. BBQ’s trips to the beach, the whole family coming together. Us kids getting to drink a ridiculous amount of soft drink that we never got throughout the year while the grownups embraced the true Aussie stereotype with a cold beer.


Now that we’re older, our times are spent more with our own families, but it is still the same. My husband and I take the kids to the beach, we have a BBQ…only now I get to drink the beer. LOL ;) 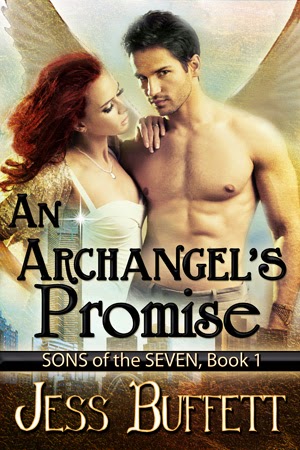 Blurb:
Will the enemy be powerful enough to break an archangel's promise?
For the last ten years, Gabriella Richards has struggled with the pain of losing the only man she's ever loved. From out of nowhere he returns to throw her life into chaos, and it isn't without consequences.
Hunter Bailey had always known he was different, but nothing could have prepared him for the truth. As the son of an archangel, he has been on the run for years from those who seek to wipe out his kind—the Nephilim. With a destiny unknown even to himself, nothing will stop him from returning to claim the woman he loves and the happily-ever-after he was promised.
Gabriella finally has the love of her life back, but at what cost? And will the enemy be able to break an archangel's promise?
Excerpt:


Gabriella started moving forward. Nolan tried pulling her back, but nothing could keep her still. The need she felt coursing through her, urging her to the man on the other side of the room, was just too strong, powerful, and consuming. She barely acknowledged the throng of people surrounding her as she made her way across the floor, her eyes transfixed on her destination.

Her destination being the tall, strong, and commanding form of her childhood best friend. His dark, almost black, hair still fell into his sapphire eyes, and his lips looked just as soft and supple as they had been the last time she had seen him. When she stopped mere inches from him, Gabriella held her breath, unable to believe Hunter really stood in front of her.

The small quirk of his lips at her indecision answered her question. Oh, this was her
Hunter all right.

Hunter’s hand came up to cup the back of her neck, drawing her those few inches closer. Shocked at their sudden closeness, Gabriella only had enough time to suck in a breath before his other arm came around her, pulling her against his hard chest, his mouth taking hers in a kiss filled with possession and a hunger that had her opening up for more.

The kiss was fearless, robbing her of thought. Gabriella’s body melted under his mastery, becoming pliant, molding into his as if they’d done this a million times before. She felt a thrill run through her as the familiarity of the man’s embrace drew her in deeper. This was her Hunter. Oh God. Hunter’s hand roaming up and down her back created such delicious sparks of electricity along her spine. She’d never felt so hungry, so needy.

Pulling back, needing to breathe and to see his face, Gabriella felt tears pool in her eyes. “You’re real.”

Hunter smiled down at her, his eyes softening as his large hands cupped her face. “Yeah, Gabby. It’s me.”

How was it possible? Hunter was standing right in front of her, kissing her. It was all so surreal. She caressed her fingers over his tanned face, taking it all in. His features, once boyish, were different. They were replaced with a strong jaw line and an essence of confidence and maturity. Gabriella noticed that his eyes, though still the same startling sapphire, now held flecks of azure and shards of cobalt that made them seem fiercer somehow.

Still the same, but so different as well.

“I missed you.” The deep rumble of his voice made her weak in the knees and dampen between her legs. It was such a strong reaction, it startled her out of her haze.

He had been gone so long.

What the hell was she doing?

Wrenching herself out of his arms, Gabriella gazed up at him, at the boy who had left her broken and alone. The longer she stared into his eyes, the more furious she became with both him and herself. Why on earth was she kissing him? And how dare he show up like this, acting like he had all the right in the world to be there.

Raising her hand, she delivered a blow straight across his handsome face. Hunter had clearly not been expecting that reaction because he staggered back, his shock evident as his eyes
widened and his hand covered the abused cheek.

“What was that for?”

“Really? You have no idea why I would want to slap you?” she seethed. “You disappeared, Hunter. You left when you swore you never would. I thought you were dead.”

His face softened, which just served to irritate her more. “I know my leaving like that must have hurt, but surely you can give me a chance to explain.”

Unbelievable. The bastard thought she actually had to give him a chance. She didn’t owe him a fucking thing.

“No, Hunter. I don’t have to give you a damn thing.” Spinning on her heels, she headed for the doors leading to the stairway. Screw waiting for the lift. The sooner she got out of there the better.

“So that’s it. You won’t give me anything?” Hunter called out behind her.

Pausing at the doorway, she turned to see him still standing in the spot she had left him, and smiled sadly. “You know, if you had shown up a few years ago, I probably would have given you anything you asked for.” Her face hardened, and she narrowed a glare on him. “But I was weaker then. I had to become tougher because the pain of losing you was too much to bare. So congratulations, Hunter, you made me a stronger person. You should be proud.”

Jess Buffett was born and raised in New South Wales, Australia. She married her high school sweetheart and they live on the Central Coast with their two children. Jess is a hopeless romantic who loves stories about true love with a happy ending—which is probably a good thing given what she writes. She is a huge fan of M/M and M/F romance—anything with hunky men in all their glory, whether they be shifters, vampires, cowboys, or the boy next door. Jess is a firm believer in soul mates, happily-ever-afters, and love at first sight, but that sometimes people need a second or a third meeting for the brain to catch up.