Shelli Stevens on Straddling the line of Intimace scenes 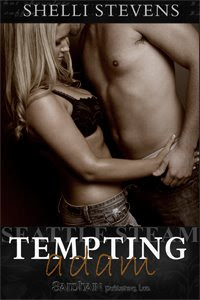 I remember the first book I wrote. The determination to write an entire manuscript and not just a few pages. The excitement, the fever, the absolute lack of writer’s block.
Until I hit a wall. A big old wall called: Shelli’s first sex scene. Ever. I remember typing the build up to it...

(Build up to sex in Ain’t Misbehavin’)

“You know, forget it. I wanted you and had the crazy notion you wouldn’t mind getting me into bed, but apparently I was wrong.” She almost made it to the door when he grabbed her by the waist and spun her around. “Oh, I want you all right,” he said, his voice low and thick. He lifted her so her legs wrapped around his waist. “I just had to make sure you knew what you were doing.”

I typed that little bit above, stared at the computer. And completely froze. I couldn’t do it. Write sex. I stood up, paced the house, sweating and muttering to myself. I had to psyche myself up to write the love scene. How do you write that kind of intimate moment between a man and woman? It’s so personal. Writing that first sex scene is a bit like losing your virginity, just in the literary sense.

I knew I just had to blow through it (no pun intended). I didn’t set any rules for myself on how long or hot it had to be. I’d use the zillions of love scenes I’d read in other books, and my own personal experiences. So I grabbed a beer and went back to the room and locked the door. Two hours later I emerged bright red (partly from being hot and bothered, but I’m sure you didn’t want to know that!) waving the pages for my roommate to read.

Granted, there are a few books you’ll see of mine that are still scortching (one I may have to take another pen name it’s so dirty!), and every once in awhile I still like to write something with a bit of kink.

It’s actually a hard place to be at, because my books are still hot enough to offend the mild romance readers. But those who want it hot hot hot! might tend to wrinkle their nose at my love scenes.

But I think as a writer you need to be true to your natural voice. A reader can tell when you’re writing something you’re not comfortable with. So here I am, Shelli Stevens, an author who proudly writes really hot vanilla sex. Or is that...vanilla with chili flecks in it? Hmm.... *Grin*

I like your heat, it's not too over the top, but would not call it Vanilla either. (Vanilla with chili flakes, mmm sounds yummy!)

As yet un-pubbed, and rather new to the idea of other folks reading my stuff - I'm not sure where I fall. Certainly not Vanilla, but then what?

Hum.. now that I'm thinking more about this I have not actually written any sex/love scenes in my current WIP. Most of what I wrote on this book was during Nano November 07. Much of it was written at Starbucks or Borders in with a group of my fellow Nanites, some of which were males in junior high or high school.

The places where my less-than-vanilla-sex should be on the page was replaced with -
"Dylan and Mark are sitting at the table with me and I just can't bring myself to write a sex scene while in the presence of virgins."

I guess I'll have to let you know if I have chili flakes in my vanilla ice cream when I make it that far.

Susan Lyons said…
Great post, Shelli, I totally identify with you. I'll hold up my hand and proudly confess to being another vanilla sex girl. (Well, maybe we could call it chocolate sex. Luscious and satisfying, but not exactly "out there".)

Yes, I think we write from our own experience and fantasies, and if it doesn't turn us on, we probably can't write it effectively. I've had enough positive feedback from readers (and reviewers) - as I know you have - to reassure me that there are lots of chocolate readers too.

I'm like you, in that I naturally write hot. When I was writing my very first book (a mystery), a night school writing class teacher said I should be writing erotica. I said, "huh?"

You're right about our work being too spicy for some readers and too tame for others, but I bet the same can be said of almost any romance. Thank heavens there's so much variety in romance today - there's something for every reader, be she vanilla, chocolate, or some other flavor.

Shelli Stevens said…
Patricia, thank you so much for having me here today! You have a fantastic blog!

Lesa, it really is a big emotional step writing that first love scene. I can't wait to hear about your 'first time'. *Grin*

Susan, I've often thought we have a lot in common with the way we write! And I love your books. Seriously, I think we do hit a spot in the market that doesn't want the heavier stuff, but still likes it on the spicy side!!
April 22, 2008 at 3:18 PM

My first time was scary, awkward and painful, just like the real thing. I was even embarassed for my husband to read it! (I'm really not that inhibited, just shy) Then my thirty-something daughter begged me to let her read what I'd written......OMG! Panic time! After I finally admitted why I was stalling, she laughed and told me she read sexy stuff all the time and not to be such a wimp. So I gritted my teeth and hit the 'send' button. Once I got over the first time, I was ok. Now it doesn't bother me at all.

Shelli Stevens said…
Judy, it is scary that first time. You're right, just as scary and awkward doing it. And I think the first time you type it, you're like saying aloud, 'Did I really just write that?!' At least a dozen times. LOL. I think that's awesome you sent it to your daughter!
April 22, 2008 at 3:31 PM

I'm relieved to know that you wirte it hot because I like it hot :)

I've had Tempting Adam since it's release but I couldn't make myself read it before Dangerous Grounds, which I just bought. Now I'm even more excited to get started!

I'll admit it too, I love vanilla sex! :) And I love it more when a author can make it seem like the hottest thing one can ever experience.

It's very personal I think, even if you are making up stuff. It seems like it's almost exposing to the world what you would normally only share with a lover. Maybe just a bit too intimate.

Thank God you authors do that though, because I love reading it. Old perv that I am. LOL

Shelli Stevens said…
Madame Butterfly! We have similar reading taste! I delve into the harder stuff every now and then, but like my 'meat and potatoes' too!