Review: In The Hands of A Stranger 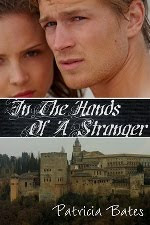 Evangelina la Reina Herrera Ortega was a beautiful, but spoiled Spanish prize. Her marriage to Hernando Santiago, the son of one of her father’s investors, would secure her family’s future. However, once she met her fat, arrogant betrothed, Evangelina couldn’t imagine being wed with such cold calculation. Why weren’t her feelings being considered? And what about her strange attraction to Adam Butler, the handsome, brawny Australian ex-convict working in the garden? When Santiago attempts to rape Evangelina, Adam rescues her from the plump, pompous fool and flees with Evanagelina into the countryside.

The pair find shelter in a tiny, derelict cabin in the woods and set about fixing it up. Patiently, Adam explains the most mundane tasks to the pampered Spanish lady and Evie takes great pride in her accomplishments. The two are constantly thrown together and their mutual affection soon turns to love. However, when a tree falls on Adam, Evie must make a terrible choice - remain by Adam’s side as infection and fever ravage his body or risk capture and go for help. The doctor insists that Adam be cared for in town and Adam has barely recovered when Evangelina’s father tracks down the couple.

Will Evangelina once again submit to her father’s will or does she now have the courage to fight for a new life with Adam and a love she can no longer deny? This is a coming of age story set in a time when women held few rights and a girl’s duty was to her family, not to herself. Well written and inspiring.