Feeback: How to get it, how to give it 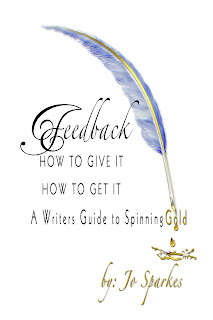 Feedback … a kinder word for criticism, is an organic component to life.When a toddler learns to walk, he falls. He screams, cries – and persists. What would happen to the human race if he gave up after a few bumps?Before we could read self-help books, before we could understand a language and sit in a classroom, we learned by trial and error. “Feedback” is the natural teaching process. It’s how the creator set it up. It’s how the world actually works.Here, at last, is a simple process for getting the most from all the feedback the world offers us.

﻿
Please welcome Jo Sparkes to Of Ink and Quille. Today she's stopped  by in her impressively busy schedule to tell us what inspired her to write her current book: Feedback - A Writer's Guide to Spinning Gold.
Welcome, Jo. What inspired this book?

I was teaching screenwriting at a college, and a teenager asked a question. About the harshness of
criticism, and how to know if it's real.

Perhaps someone had told him his characters were bad, or his story stupid. It wasn't just a question, it
was a cry from the heart.

It triggered a heart-felt response.

You see, I'm one of those people who desperately want to please everyone. It really bothers me
if everyone isn't happy – I always feel somehow responsible. So any sort of criticism really cuts.
Deep down I always felt that since the other person isn't happy, I'm directly responsible. I must done
something terribly wrong.

So I learned to avoid criticism altogether. I actually became very good at that.

And then I had a chance to write and get paid.

I jumped into it eagerly, and discovered that writing always involved other people. Commercials or
web videos, articles to be published. It turned out you couldn't write without someone else reading it.
And there was always feedback. Changes to make, things the producer or editor didn't like. And they
weren't even nice when they gave it.

Getting my dream meant facing my fear. It's odd how often that happens.

The criticism couldn't be avoided. I had to face it, or give up my dream. Believe me, it was a very
difficult choice. Giving up seemed so much easier. I don't think I ever made a choice, either. I simply
kept going. Got through a project here, managed to ask the director questions there. That sort of thing.
And there were times I cried myself to sleep, and swore I'd never go through it again.

Eventually I learned how to get through it with ease.


And now this teenager in the classroom brought it all back to me.

Have you ever had one of those times when you hear yourself answer and think, 'wow, that's pretty
good! Where the heck did that come from?'

That was one of those times. I just wrote it down and put it in a book.


For some reason it's easy to cling to criticism. To walk through the world telling yourself, “I can't act my way out of a paper bag,” or “my work is sloppy no matter what I do.”
If you think about it, you probably can recall criticism you heard as a child. When I was eight-years-old, I overheard my father tell my mother I was lazy. To this day, if I'm not getting everything done as fast as I wish, if things are piling up on my desk, I can hear him saying, “she's lazy!”
Clinging to criticism, to all the negative comments or snide remarks we've heard over the years, creates a very heavy burden. If you walk through the world so weighted down, you will inevitably slow and finally stop altogether from the sheer pressure.
All you can humanly do is what we just did. Take in the information, analyze it, and decide what to do. There is nothing more to be done.
It – the criticism – has served you. Now send it on its merry way.

A well-known Century City Producer once said that Jo Sparkes "writes some of the best dialogue I’ve read." Not only are those words a compliment to Jo’s skills as a writer,but a true reflection of her commitment to her work.


Taking every class she could find, she had the good fortune to study with Robert Powell; a student of renowned writers and teachers Lew Hunter, and Richard Walter, head and heart of UCLA’s Screenwriting Program.

The culmination of those years was the short-film "The Image", which she wrote and produced single-handedly. And in so doing, she became fascinated with the dynamics of collaboration on a project.

Since then, Jo hasn’t looked back. Her body of work includes scripts for Children’s live-action and animated television programs, a direct to video Children’s DVD, television commercials and corporate videos. She's been a feature writer on ReZoom.com and a contributing writer for the Arizona Sports Fans Network; where she was called their most popular writer, known for her humorous articles, player interviews and game coverage. Jo was unofficially the first to interview Emmitt Smith when he arrived in Arizona to play for the Cardinals.

She has adjunct taught at the Film School at Scottsdale Community College, has teamed with a Producer on a low budget thriller, and a Director on a New Dramady.” She went in front of the camera for a video, “Stepping Above Criticism”, capturing a popular talk with her students.

Her new book, FEEDBACK HOW TO GIVE IT HOW TO GET IT, shares her lessons learned with writers, and indeed everyone dealing with life's criticism.

When not diligently perfecting her craft, Jo can be found exploring her new home of Portland, Oregon, along with her husband Ian, and their dog Oscar.


“In her compact, wisdom-charged Feedback Jo Sparkes provides sharp, sharp, cogent, advice not only for writers but for all people who value creativity and seek to lead fulfilled, creative lives.

“This slender volume provides more bang for the buck than far longer, weightier tomes. It is a splendid resource to which writers will refer repeatedly.”
- Richard Walter Chairman of Screenwriting, U.C.L.A.


“The lessons contained in “Feedback” are not for the writer who is merely looking for a compliment, but rather for those who are striving for accomplishment.”

Jo Sparks simplifies the feedback process in this concise easy to implement guide to giving and receiving feedback. As an actress, I believe everyone can benefit from her experience, not just those in the industry.
~~~~~~~~~~~~~

Jo will be giving away a $50 Amazon.com gift certificate to one randomly drawn commenter during the tour.

Mary Preston said…
Feedback is such a positive word. Criticism sounds harsh before you even begin.

MomJane said…
I think when people are reviewing a book, they should be very careful about criticism. However they should also be sure to give constructive comments if they have any.
May 2, 2012 at 4:03 AM

Jo said…
We can't really get others to treat us carefully in giving criticism. But we can learn to step into our own power and transmute it. Make it work for us.

Catherine Lee said…
It still pains me when I read that comment you overheard your dad say to your mom. Words can hurt...especially when heard by children.
May 2, 2012 at 7:02 PM

I think my father would take it back if he could. He spoke out of frustration. He actually was a pretty good guy.

Karen H said…
Just popping in to say HI and sorry I missed visiting with you on party day! Enjoyed reading about your book.