Welcome Elise, pleased you could stop by. To celebrate you're having a bit of a contest, aren't you?
Thank you for having me. I'm having a blast being here. Yes, I am. I'm super excited to be able to share Jack and Gillian's stories. They deserve to be happy and I'm offering a free copy of Five Alarm Lust to one lucky commenter.
Wait? Who?
Jack and Gillian - There's a play on their names that is very ironic...I'll give you a hint - it comes from a nursery rhyme. 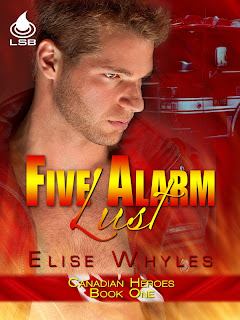 Survivor Gillian Hilliard is finally healing from the
nightmares of her past Fearing no man will ever find her attractive; she has hidden behind a disguise of simple attire and large glasses. When Gillian meets firefighter Jack Payle, she is instantly attracted, and in the face of that attraction enjoys a wild night of sex with him. In the cold light of day, however, she’s torn apart by guilt and shame, and retreats to the familiar comfort of her simple life.

After years of chasing the wrong kind of woman, Jack is
shocked by the instant attraction he feels for the mousy historian with shadows in her eyes and an unchecked passion beneath the surface. Looking into her dark eyes, Jack can’t help the lust firing his blood or the memories of her response to his touch. Passionate, sexy Gillian is everything he’s ever wanted, and his
heart knows it. Are they strong enough to face down the demons haunting Gillian? Can she trust the man who holds her heart with her darkest secrets as they struggle to overcome the shadows of the past, or will the darkness destroy them before they begin?

Pain lashed at Gilli, who swallowed against the rising tide of memories. Absently she rubbed at her right thigh, the faint scar searing with pain. Michael deserved to rot in hell, and she hoped he was suffering every day while in prison. “He didn’t put up with me, Mother. I believe you of all people should remember that, since it was you who drove me to the hospital after one of his episodes.”


“The son of a bitch shoved me through a wall, not to mention down the stairs. I’m not even going to argue with you, Mother. The glasses are mine. I like them. They’re staying.”


“Whatever, do try to hurry Gillian.”


Gilli shook her head and listened to the rapid tapping of her mother’s heels on the hardwood floor. “Only woman I know who wants a huge wedding every time,” she grumbled as the stylist finished pinning her hair up.


“That’s it, Miss Hilliard. As per your request, I left most of it down.” The young woman leaned down, her hand on Gilli’s shoulder. “You’re going to knock ’em dead.”


Gilli offered a short, weak laugh and patted the girl’s hand. “Thanks.” She slipped her glasses on and rose to totter toward the door on the stilettos her mother persisted she wear. As she exited, the door closed behind her with a click. Gilli turned, smacking face first into a tall, hard wall of flesh before her. Heat seared her body at the touch of his hands on the bare flesh of her back. Putting a couple of inches between them, Gilli glanced upward. Her heart dropped before galloping in place.


Dark brown hair curled over a tanned forehead, green eyes as dark as pine stared at her, bemusement sparkling in them. “Excuse me, miss.”


She shuddered at the slow drawl curling like a lover’s touch into her core. Her labia pulsed beneath the lace of her panties. A flush crept along her throat to heat her cheeks and she ducked her head to hide the wave of color washing over her face. She cleared her throat. “No, pardon me. Entirely my fault.”


Scurrying down the hall, she gasped at the sensitivity in her breasts. Heavy, full, the nipples throbbed beneath the layers of satin and lace. Desperate to cool her blood, she darted past a couple of women and into the ladies room. The thin metal door offered minimal protection as she locked herself into a stall. A thud filled the silence as she let her forehead drop, leaned against the icy metal, and inhaled.


Gods above, Zeus in the flesh right before me. What I wouldn’t give to have him … but he’s not going… Arousal scorched along her veins, pooling between her legs and soaking her underwear. Like venom, her ex’s sneering tone filled her mind. You couldn’t turn a light bulb on, Gillian. You’re sexless. You should get a boob job. Can’t count…


An uneasy cringe escaped in spite of the relief at the shattered memory. Gillian squeezed her eyes shut. “Mother, can I not use the facilities without you harping at me?” Gillian smoothed her skirt down, rolling her shoulders forward in the hope of hiding her erect nipples. “I’ll be there in a moment.”


“Well hurry up, they’ve already got everyone seated. Goodness, child, you’d think you’d remember this was my wedding!” The bathroom door clicked shut on her mother’s tirade.


With a roll of her eyes, Gillian stepped out of the stall, shot a look at her reflection in the mirror, and inhaled.


“There’s no point in getting hot and bothered over the likes of him. He ain’t going to want you.” Gilli waved a hand at her reflection, a perfect imitation of her mother. “Horn-rimmed glasses, mousy-looking hair, no tits. Didn’t Mike teach you a damn thing, Gillian? Men don’t want a mouse, they want a sexpot, and you’re not it.”


With a quick shake of her head, she smoothed her skirt down, sucked in a deep breath, and pulled open the bathroom door. She glanced around carefully before darting into the hallway.


Pressed close to the wall, she took her place before her mother, feeling like an over-stuffed Easter egg as the Wedding March began to play. A smile pasted on her face, she gripped the flowers in her hand tighter and began the slow but steady shuffle toward the preacher.


Focused on getting there without falling, Gilli gasped at the man standing next to the altar. Laughing green eyes watched her, his lips turned upward at the corners. A slight shadow covered his square jaw. The dark suit he wore clung to his broad shoulders, tucking in at his waist. She wondered if beneath his suit coat, his ass was as good as the rest of him. Embarrassed, she stepped back, narrowly missing tripping on her own gown’s hem.


Her mother’s pointed clearing of her throat drew her attention to the woman sashaying along, the yards and yards of tulle and lace out of place on a woman in her fifties—who’d had six previous husbands and more lovers then Gillian thought healthy. The unspoken warning in Barbara’s eyes pierced clearer than any shouting match could be. There would be hell to pay if any attention slipped from the bride.


“Typical.” Gilli glared at the flowers, disgust rolling in her nauseous gut. She offered a prayer the ceremony would draw to a quick end so she could ditch the shoes, the flowers, and find a quiet corner to relax in, with the help of an expensive bottle of champagne.


She shot a glance across the aisle, heat suffusing her face when she caught sex in a cummerbund’s eye. Screw the wine—what she wouldn’t give to get lost in him. Maybe if she’d been different… Pushing aside the vague thought, she focused on the drone of her mother’s voice as she spoke her vows.


Time for the hard work - what does Gillian think of Jack when she bumps into him in the hallway by accident? The lucky winner will win a free copy of Five Alarm Lust.

Carole Di Tosti said…
Tweeted and promoted your post. It's sitting on FB. Here: https://www.facebook.com/Writingdivine?ref=hl Return the favor and like my pg? Hope you see this in time before other promotes overshadow it.

Too bad this is not set up for comments right on the pg. Hmmm.

Love for you to snoop my blog and join if you feel to. It's http://www.thefatandtheskinnyonwellness.com/